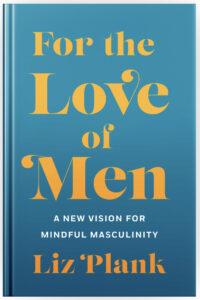 When the world seems completely doomed, coming across glimpses of light provides the ultimate relief of hopefulness. Which is exactly what Liz Plank provides with her book: For the Love of Men, A New Vision for Mindful Masculinity.

When considering the old fashion two gender norm, we have seen traces of toxic patriarchy influence both parties. “I’ve long focused on the numerous consequences of the patriarchy for women, because there’s no shortage of them.” (Pg 7)

There are countless of hills women face at the expense of the patriarchy to continue to thrive. However, miraculously, women have shown up to defend and represent what they are capable of. Even in the face of insurmountable battles, women come out in the end to uplift their community and the next generation.

Now, in Planks words “take a moment to put a gender lens on men”, “although the news often focuses on the threats of terrorism, natural disasters, and nuclear war, there is no greater threat to humankind than our current definitions of masculinity.” In short, masculinity reeks of ego, power struggles and entitlement. Or what Twitter would like to call it “big dick energy”.

These three traits are intertwined to fuel global toxic masculinity. It is an unfortunate reality that starts at a young age for boys. “It presents intself in subtle ways, such as the way we raise boys differently from girls. It starts when we equate emotion with weakness and direct boys to display strength no matter what.” Meanwhile, young girls are openly encouraged to express their emotions. Being able to comfortably express ones emotion is not a bad thing at all. However it does become problematic when we don’t allow or encourage young boys to be vulnerable.

Plank also mentions the childhood behavior developments between young boys and girls with video games and Barbie dolls. While we spend a fair share of time discussing the harmful body expectations of young girls through dolls, we hardly ever pause to realize what first person shooter games could do for a young boys development. These behavior structures are implemented at such a young and impressionable age that ultimately create a bar for boys to live by. Ideologies for boys are to; not cry, supress feelings, and dominate.

“When half the population gets trained to block emotions, they lose the ability for compassion.” Which snowballs into bigger issues overtime, most notably, multi-faceted violence (e.g. personal harm, domestic violence, neglectful behaviors or harmful actions on to others) Then we excuse any terrible thing done by boys with the term– boys will boys. So not only is there a supply of directions for young men to follow but there are excuses we apply for them to continue this lifestyle.

This concept of behavior equaling gender identity is toxic and a firm structure that maintains it’s shape by the same people who benefit from it. Planks book challenges the way we have been percieving masculinity and how we can keep an open mind about the way its been dominating our world. We have seen many humane victories by women for women, I believe it is time that we as women share a helping hand with men to encourage them to challenge this system that was enforced upon them. Much like the ones that their previous generations have inflicted onto our ancestors.

This entry is licensed under a Creative Commons Attribution-NonCommercial-NoDerivatives 4.0 International license.

3 thoughts on “For The Love of Men”

Need help with the Commons? Visit our
help page Send us a message

Built with WordPress Protected by Akismet Powered by CUNY